Glass – mostly mouth blown – was used in the countries around the Mediterranean from the third millennium BC. It was used, first of all in Egypt and then in Rome to produce, increasingly on an industrial scale, prestigious containers and crockery.

Glass panes were used to close windows in large public spaces such as public baths or prestigious private villas: Pliny the Younger mentions them in the first century AD. The glass panes, which were made with flat moulds, were held by metal or wooden frames.

Following the fall of the Roman Empire, production and experimentation with glass moves to the Middle East and Northern Europe. In the meantime however, from the IX century Venice establishes itself as a centre of excellence for the production of mouth blown glass. This was based on its regular contact with the Middle East which, thanks to its maritime trade and exchanges in the Adriatic area, had brought a love of glass to Venice. Today, many centuries on, this log standing tradition is still flourishing and is one of the most famous examples of the successes of the “Made in Italy” label with manufacturers such as Venini.

Another important centre is Altare, in Liguria, in which, in medieval times, a guild of master glass makers is established and who experiment and innovate to such a degree that in 1400 a corporation is created and becomes known as “Università del Vetro” (Glass University). Famous names in recent times who draw from this tradition are glass makers C. e R. Bormioli. 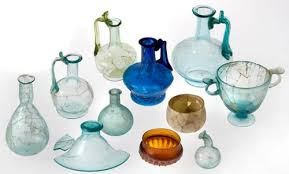 The development of stained glass windows as a medium to narrate stories from the Bible is typical feature of medieval times and Italy is full of famous examples of such works. The influence of Giotto who, compared to the art from Northern Europe, creates an original and innovative approach with solutions inspired by murals. Another innovative characteristic of the development of Italian stained glass is the direct involvement of well known contemporary artists. There are the famous cartoons of Simone Martini, Giotto e Duccio di Boninsegna (Assisi and Siena), and following them those of Ghiberti, Paolo Uccello, Donatello, Ghirandaio (Florence) who manage to maintain, even using this new medium, their unique style and succeed in keeping faith with the perfection of their oil paintings. 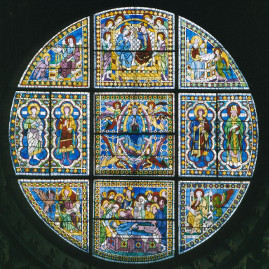 Siena cathedral, based on a drawing by Duccio di Buoninsegna

The seventeenth and eighteenth centuries see a general falling out of favour and loss of prestige of stained glass windows.  The tradition continues mainly in northern European countries for non-religious decoration.  There is a sudden revival in the nineteenth century driven by the Nazarene and Pre-Raphaelite movements. The new stained glass windows are inspired by gothic and medieval as well as Italian Renaissance art. Stained glass windows appear in new contexts such as private houses and large public buildings, and new styles and themes are explored, totally unconnected with the previous religious themes and narrations. Towards the end of the century the popularity of stained glass moves across the Atlantic to the USA, where C.Tiffany is its major exponent, and to the other ex-British colonies.

The observation and imitation of nature, free from any didactic or edifying intent, become the new themes adopted by the Liberty style as promoted by W.Morris: in Italy there are also famous examples which can be seen in the artwork produced by Cambellotti, Paschetto, Grassi and Botazzi for the Casina delle Civette in Villa Torlonia in Rome, as well those for the rising middle class households (Villa Igea in Palermo, the Casinò of San Pellegrino) and in entire quarters of big cities (Rome, Bologna, Lodi, Milan) for which they are commissioned.

With the new art movements developing in the first decades of the twentieth century such as abstractionism and functionalism the stained glass windows become less and less figurative: abroad (Matisse, Chagall, Léger, Braque) and Italy (E. Castiglioni E., A. Sasso, A.Grassi, V.Zecchin) many painters start to study and research new formal and chromatic solutions.

Nowadays the new architectural solutions which promote cement and steel structures provide large spaces which can be filled by stained glass windows produced with the direct involvement of artists and architects: research and innovation is concentrated in the USA and in GB as well as some Nordic countries. In Italy new partnerships are created between famous stained glass window makers (Grassi, Giuliani) and artists such as P. Dorazio, L. Ontani and architects.